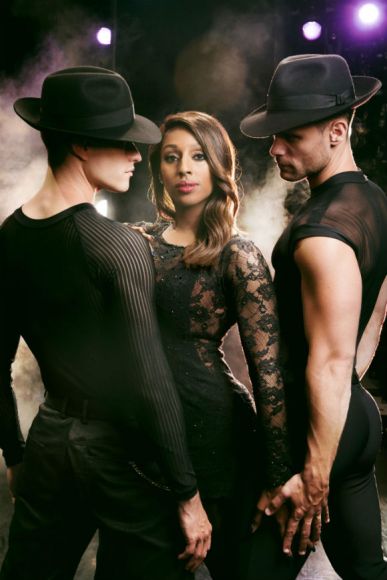 Due to receiving a stress fracture in her heel during rehearsals, Denise Van Outen has unfortunately been forced to delay her scheduled run in Chicago at the Phoenix Theatre.
Van Outen, who previously starred in the musical as Roxie Hart back in in 2001, had been scheduled to take on the role of Velma Kelly from September 24th to November 17th.
New dates for her return to the show are to be announced shortly, as will her replacement in the hit show.
Van Outen was set to star alongside Alexandra Burke and Duncan James in the musical.

Stephen Mangan and Lara Pulver join the Guys and Dolls cast at Royal Albert Hall
Stephen Mangan and Lara Pulver have joined the cast of Guys and Dolls which will showcase three special performances at the Royal Albert Hall this October.
Mangan is the cast as the narrator, and arrives after a stint performing in Harold Pinter’s The Birthday Party as part of the 'Pinter at the Pinter' season. Lara Pulver takes on the role of Sarah Brown in the show. She was recently the recipient of the Olivier Award for Best Supporting Actress for her starring role in 'Gypsy' at the National Theatre.
West End veteran Paul Nicholas also joins the cast alongside Sharon D Clarke who will star in the show prior to taking on her role in the upcoming West End production of Caroline, or Change.
Leading the all star cast is Adrian Lester, who plays the part of Sky Masterson with Jason Manford starring as Nathan Detroit, and Clive Rowe reprising his role in the 1997 West End revival of the show as Nicely-Nicely Johnson.
Also featuring in the cast will be Stephane Anelli, Cory English, Dan Burton, Julian Forsyth, Nia Jermin, Alexis Owen Hobbs, Ross Mclaren, Sévan Stephan, Matthew Whennell-Clark, Davide Fienauri, Stevie Hutchinson,  Rachel Stanley, Ebony Molina, Jo Morris, Cris Penfold, Meow Meow, Jak Skelly, Joe Stilgoe and Alexandra Waite-Roberts.
Guys and Dolls has never before been performed in its entirety at the iconic venue and tells the story of New York’s super slick gamblers and nightclub dancers, and includes some of Broadway’s best known hit songs, including You’re Rocking the Boat”, "Sit Down" and “Luck Be a Lady Tonight”.
Heathers the Musical to star Nathan Amzi
Joining the cast of Heathers the Musical at the Theatre Royal Haymarket until November 24th is Nathan Amzi who is to take on the roles of Big Bud Dean and also Coach Ripper.
Amzi's recent stage credits include 'Prom Queen', 'Aladdin', and 'In the Heights'.  He also appeared in the 2014 TV talent show The Voice and will join a cast that includes Carrie Hope Fletcher playing the part of  Veronica Sawyer and Jamie Muscato as Jason Dean. The three Heathers in the show will be played by T’Shan Williams, Jodie Steele and Sophie Isaacs.
To purchase tickets securely online to any of these shows or for other West End theatre tickets please visit  www.theatretickets-london.co.uk/