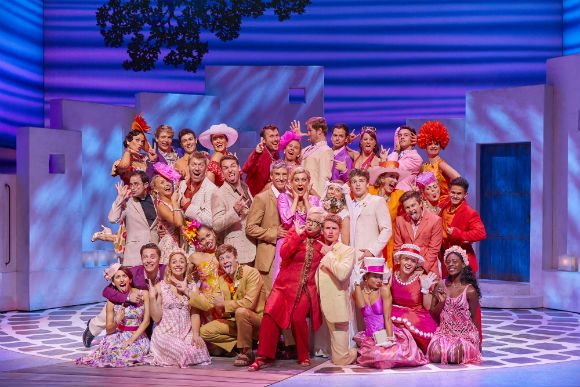 A new extension has been announced for smash-hit ABBA musical Mamma Mia!
The Novello Theatre, will continue to host Mamma Mia! which will now take bookings until 14th September 2019. This latest extension period will also welcome the 20th birthday of the smash hit show on 6th April 2019.
Mamma Mia! tells the story of Sophie who invites her three potential fathers before her wedding to Sky to finally learn who her father is, whilst keeping her mother Donna on her side. The show features a host of ABBA's timeless hits including “Waterloo”, “Super Trouper” and “Dancing Queen”, Mamma Mia! is the ultimate feel-good musical of the West End.
The London cast of Mamma Mia! stars Sara Poyzer as Donna, Kate Graham as Tanya, Ricky Butt as Rosie, Richard Trinder as Sam, Neil Moors as Harry, Stephen Beckett as Bill, Georgia Louise as Sophie, Charlotte O’Rourke as Ali, Alec Porter as Sky, Leah St Luce as Lisa, Damian Buhagiar as Pepper and Eamonn Cox as Eddie. Caroline Deverill plays the role of Donna Sheridan at certain performances.
Also in the cast are Chloe Ames, Chloe-Jo Byrnes, Adam Clayton-Smith, Adam Davidson, Luke Hall, Lauren Hampton, Jack Heasman, Jennifer Hepburn, Stuart Hickey, Zoe Humphryes, Mark Isherwood, Tyler Kennington, Robert Knight, Chanel Mian, James Willoughby Moore, Natasha O’Brien, Dean Read, Beth Relf, Annie Southall and Katy Stredder.
Cast announced to join Kit Harington in new West End production of True West
Further casting has now been announced for the upcoming West End production of True West, starring Kit Harington (Game Of Thrones) at the Vaudeville Theatre.
Sam Shepard’s play, which was a finalist for the Pulitzer Prize in 1983, is about a Hollywood writer working on his latest blockbuster script, when his unruly brother appears and convinces the producer to make a different film based on his idea instead. It runs at the Vaudeville Theatre from 23rd November.
Harington, plays screenwriter Austin while Johnny Flynn, best known for appearing in the Netflix series Lovesick, will take the role of his brother Lee.
American actor Madeleine Potter (Broken Glass, Tricycle Theatre) and Donald Sage Mackay ('Modern Family') will star alongside Harington. They are expected to play the roles Mom and producer Saul Kimmer, respectively.

Playwright Natasha Gordon to take role of Lorraine in her play Nine Night
As her play Nine Night transfers to the West End from the National Theatre, playwright Natasha Gordon is set to play a role in the production at Trafalgar Studios this winter.
Nine Night based on the Caribbean mourning tradition, which sees friends and family of the deceased gather for an extended wake period to share memories and share stories of loved ones. It centres on Gloria, a Windrush immigrant on her deathbed, and the care she gets from her daughter Lorraine, who is now based in London, and the appearance of sibling Judy from Jamaica.
Gordon, who becomes the first ever black British female playwright to have a play staged in the West End, will take on the role of Lorraine, a woman who gives up her job to look after her dying mum. She is joined by Oliver Alvin-Wilson (Robert), Michele Greenidge (Trudy), Hattie Ladbury (Sophie), Rebekah Murrell (Anita), Cecilia Noble (Aunt Maggie) and Karl Collins (Uncle Vince) who completes the West End cast.
Michael Gambon lends his voice to the first production of Jamie Lloyd’s Pinter at the Pinter season.
As part of Mountain Language - which is a play about four prisoners who are not allowed to speak their own language - the legendary actor’s voice will be used in the part of The Guard.
Gambon, whose many credits include playing Professor Dumbledore in all-but-one of the Harry Potter films, also starred in the premiere of the play opposite Miranda Richardson in 1988 at the National Theatre, as well as several other Pinter’s plays, Betrayal, Old Times and The Caretaker.
His part has been pre-recorded for the production, and he will not appear on stage in the production, which stars Paapa Essiedu, Kate O'Flynn, Jonjo O'Neill, Antony Sher and Maggie Steed.
To purchase tickets securely online to any of these shows or for other West End theatre tickets please visit  www.theatretickets-london.co.uk/