So Christmas, the season to be merry, is at an end. The tree has come down, the last cracker pulled and the last wrapping unwrapped. The joyous celebrations as we toasted in the New Year are just fading memories like the last dying sparkle from a spent firework; it is time to return to the mind-numbing drudgery of work for another year. Is there anything that could possibly lift our spirits? 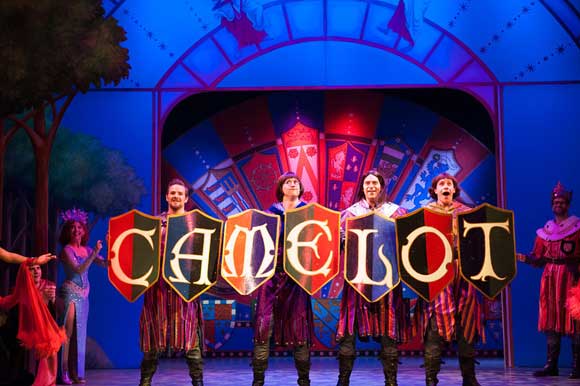 Well…there is perhaps one thing…you could pop across to BmyConcierge.com and buy tickets to the musical that has been described as “funnier than the Black Death!” Yes, it’s Monty Python’s Spamalot, Eric Idle’s loving take on the Arthurian legends.

Taking its influence from the blockbuster comedy Monty Python and the Holy Grail, this is the story of King Arthur who sets out with his trusty “steed” Patsy, across the length and breadth of Britain, in search of knights to join him in his holy quest to find the Holy Grail.

After teaming up with Sir Launcelot, Sir Robin, Sir Belvedere, Sir (Dennis) Galahad and the aptly named Sir Not-Appearing-in-this-Show (who apologises and leaves), they form the Knights of the Round Table and head for Camelot. Sent out by order of God (Eric Idle) to find the Grail, they come across an assortment of now familiar characters: The Knights who say Ni, The Lady of the Lake, Tim the Sorcerer and a killer rabbit among others.

This hilarious show has won several awards and has played to audiences around the world. Just the thing to chase away those January blues.

To securely buy tickets to see Spamalot, or any of the amazing shows at theatres across London’s famous West End, visit BmyConcierge.com
at January 09, 2014