The EDF Energy London Eye has become one of the most unmistakable sights on the famous London skyline since it was erected in 1999. It is also the most popular paid attraction, not only in London, but the entire UK with over 3.5 million visitors every year. 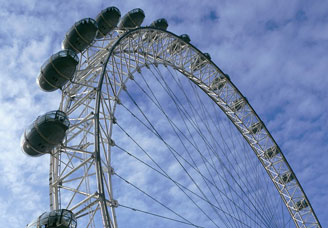 The London Eye is a huge Ferris wheel that stands on the South Bank of the Thames. It was when officially opened on 31st December 1999, the tallest of its kind in the world, standing at 443ft tall and with a diameter of 394ft. Now, only recently surpassed by two wheels in the Far East, it is still the largest in Europe and second only to The Shard for the highest viewing platform in London. As it is supported by an A-frame on one side only, unlike its rivals the Singapore Flyer and Star of Nanchang, it is the tallest cantilevered observation wheel in the world.

Each of the 32 seated and air conditioned ovular capsules, one representing each of the London Boroughs, weighs 10 tonnes and can comfortably carry 25 passengers. Amazingly, the wheel doesn’t actually stop to take on passengers unless they are elderly or disabled because it turns at a rate of only 10 inches per second. Passengers just step on and off. Then they are treated to a 30 minute ride where they can take in a view of up to 40 kilometres across London and beyond.

There are interactive touchscreen guides inside the capsules and also a London Eye 4D experience before joining the ride. This cinematic marvel, which features a 3D film with extra effects such as wind, bubbles and mist, will have the whole family enthralled.

Tickets for The London Eye, and all the other major London attractions, are available to buy securely from BmyConcierge.com
at November 25, 2013