We Will Rock You- Best Value Tickets In London? 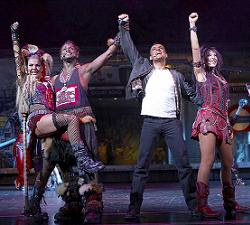 We Will Rock You has been a major feature on the London Theatre stage since 2002 and tickets for this hit stage show have been in constant demand ever since it opened at the Dominion Theatre in the west end.

London theatre shows are a big pull for both domestic and foreign visitors to the capital alike and finding value for hugely sought after shows can be difficult but with We Will Rock You playing in a large theatre such as the Dominion there seems to be a balance in favour of the consumer where discount tickets can be found from key suppliers on certain shows on a regular basis making it possibly the best value stage show in London and a guaranteed great night out.

Packed with monster hits from the supergroup Queen that are familiar to just about everyone on the planet We Will Rock You tickets continue to not only be in high demand but are also in these troubled financial times a great value night out in London which let's face it is usually a very expensive city to go out in.

Bohemian Rhapsody, Don't Stop Me Now, Another One bites The Dust, Killer Queen and many many more fantasic Queen hits along with brilliant writing from Ben Elton create We Will Rock You which has now become a global franchise but it is in London at the Dominion Theatre where tickets to the show will always be most valued as it is its spiritual home.

For a value night out in London, We Will Rock You Tickets could possibly be the best option you could ever find and will definately get you dancing in the aisles and screaming for more! How long can We Will Rock You last as London's number one rock stage show musical no one knows but one thing is for sure, at the moment the general public both domestic and foreign both give WWRU a huge thumbs up and are continuing to buy tickets to the show in their thousands every week and this trend has no sign of stopping.

In short, We Will Rock You tickets are pretty much guaranteed to give you a value night out in the west end of London and put a smile on your face at prices that even in these troubled times you can afford.
at April 15, 2011